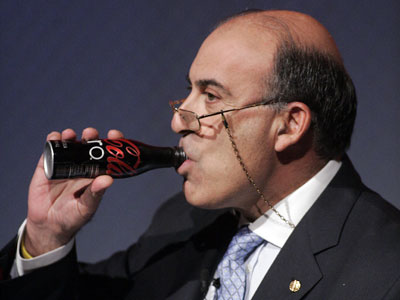 According to the Yale Rudd Center for Food Policy & Obesity, children and teens are drinking massive amounts of sugary drinks that increase the risk for obesity and diabetes.

And guess who’s to blame?  According to a new report entitled: Evaluating Sugary Drink Nutrition and Marketing to Youth,” companies that are targeting young people and using more sophisticated and ubiquitous marketing tactics to reach them are the biggest problem.

And who is the biggest culprit?  According to the report, “From 2008 to 2010, children’s and teens’ exposure to full-calorie soda ads on TV doubled.  This increase was driven by Coca-Cola and Dr Pepper Snapple Group.”

In a recent Harvard Business Review interview, Coca Cola CEO Muhtar Kent stated that a company like Coca Cola isn’t able to cure a problem or issue as big (no pun intended) as obesity. “What we are doing,” says Kent, “is providing choice to the consumer… products with no calories, products with medium calories and products with full calories.”

Kent goes on to explain that eliminating full calorie products is not the solution because many people want full calorie products and do not suffer from obesity because they exercise.  In other words, if you are fat and have diabetes, it is your own fault, not ours.  You lack awareness and balance.

Meanwhile, Kent mentioned nothing about the excessive advertising.  Yet, according to the report, “Two-thirds of the brands analyzed appeared during prime-time programming, totaling nearly 2,000 appearances in 2010.  Coca-Cola Classic accounted for three-quarters of brand appearances seen by children and teens.”

The report concludes: “If beverage companies want to be part of the solution to the obesity crisis, they must do more to protect children and teens from marketing for sugary drinks and energy drinks.”

It would be entirely unfair to blame Coke and its CEO for the growing epidemic of obesity and diabetes in the U.S., but it is not a bad place to start.  According to its Mission, Vision and Values, “Coke must look ahead, understand the trends and forces that will shape our business in the future and move swiftly to prepare for what’s to come.”

I’d say this trend is pretty obvious:  If you don’t stop targeting kids with unhealthy products, then you are simply destroying your future customer base.  That is not a good strategy for success.