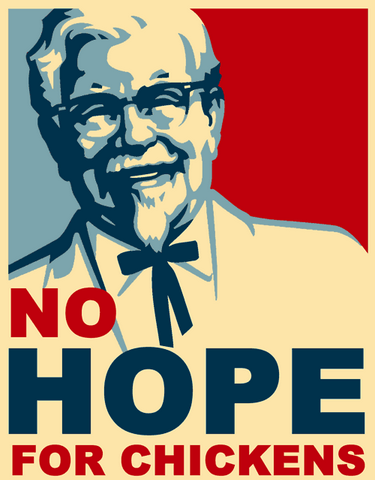 This is some crazy branding game Greg Creed is playing with the KFC chicken brand. In essence, he is telling the world he doesn’t care if you love us or hate us, just so long as you pay attention to us. Apparently he believes visibility and relevancy are the same thing.

Honestly, my initial reaction to  Darrell Hammond as the Colonel was “Okay, that’s kind of creepy cute.” And the more of the spots I saw, the more I thought, “Yeah, these spots are starting to grow on me.” And then Norm Macdonald shows up as the “real” Colonel. And then I thought, “well, this just got stupid.”

What’s the old saying, “Bad news is better than no news?”

Of course, that was long before the new TV spots started running, and I am pretty sure no one in China (home to 1/4 of KFC’s restaurants) is seeing the ads, so Creed cannot take credit for his “bold” marketing moves… yet. So is there a point to the fake Colonel ads? And will they work?

Honestly, I believe we live in a fast moving world that loves the idea of nostalgia, even when it is packaged in ridiculous TV spots featuring a couple of moderately funny comedians. Who doesn’t want to see Clara Peller one more time? Or even the original Ronald McDonald? Or Big Boy? Or Mike and Carol Brady? That’s fun stuff… for about 15 minutes.

I know Greg Creed has a good marketing track record, and I should probably not be questioning his decision-making, but I think this time he may have thought just a bit too far outside the bun.