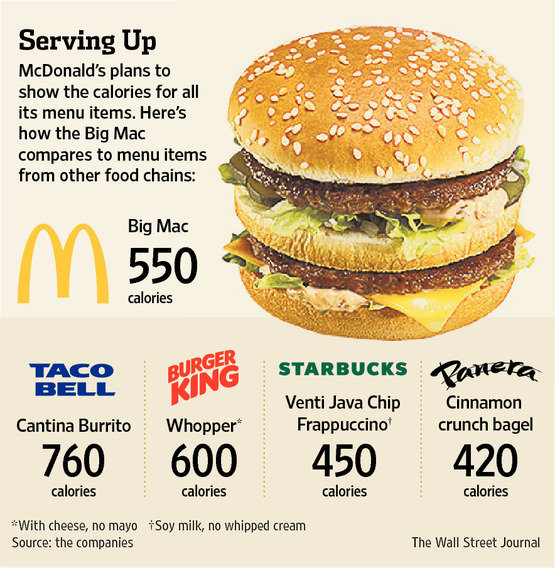 So just about the same time the American Journal of Health is reporting a new study from Carnegie Mellon University that says:  “Menu labeling does not help consumers make better food choices,” Starbucks is announcing plans to post calorie information on menus nationwide.

You can’t make this stuff up… or maybe it’s all just made up.

Let’s consider the Carnegie Mellon University research.  In the study, researchers analyzed the purchase behaviors of 1,121 adult lunchtime diners at two McDonald’s restaurants in New York City. Results suggest that incorporating calorie recommendations did not help customers make better use of the information on calorie-labeled menus.

Ordinarily I would be impressed with the results of any study from CMU.  But seriously?  They surveyed people in NYC eating lunch at McDonalds.  There are a million places to eat in NYC.  These people went to McDonalds; that was their choice.  Of course they don’t care about calories. Seriously.

The better question is why CMU decided to waste good time and money on this survey methodology.  It’s like surveying smokers about the effectiveness of anti-smoking ads.  What do you think the results are going to show?

And then there is Starbucks.  God bless Starbucks.  In an effort to extend its nutritional transparency provided to customers, all company-operated and licensed U.S. Starbucks store locations began including calorie information on its menu boards effective June 25. Why?

According to Starbucks, “Menu labeling is yet another step to extend our commitment to wellness, ensuring our customers and partners (employees) have the information they need to make informed decisions and understand all the ways that they can customize their Starbucks® beverages to be within their desired calorie range,” said Mary Wagner, Ph.D., senior vice president of global research and development at Starbucks.

But according to Brian Sozzi, CEO of Belus Capital Advisors, “[Starbucks] might be trading down on calories, but they’re trading up in prices. They’ve done a great job putting more product out there, like their new Evolution line of cold-pressed juices, which can cost just under $6. That’s far more expensive than a $4 Frappuccino, but it’s seen as a healthier option. They’re finding new ways to keep you in the store.”

What this means to the average consumer is something I learned many years ago while attending Jesuit high school:  caveat emptor… let the buyer beware.

Oh, and just in case you missed it, a new study by Harvard School of Public Health researchers found that men who skipped breakfast had a 27 percent higher risk of heart attack or death from coronary heart disease than those who reported they ate breakfast.

This makes me wonder… is it better to eat an Egg McMuffin and wash it down with a low-cal cappuccino or avoid the calories and skip breakfast? It ain’t easy being human.