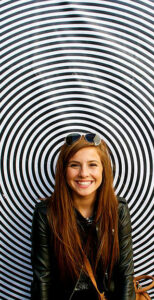 Born in Bodrum, Turkey, Karsu moved to the United States when she was three years old. She has always had a passion for film. As a young child, she would constantly be filming her surroundings with her family’s camcorder. As a middle school student, she joined the ranks of a video production studio at a local library. There, she taught people how to use equipment and worked with green screens. After a few years, she was on her high school’s news production crew. Today, Karsu is a full-time intern with Sweeney and works to produce and edit videos and digital content for the agency and clients.

Due to her love of movies and her life-long passion for video, Karsu decided to put those interests to work and majored in film studies at University of North Carolina Wilmington. After two years in college, Karsu added communication studies as a second major. As a film student she learned different aspects of storytelling; how to build characters, and how to relay ideas to an audience. Her communication major then taught her how to effectively relay those ideas to a broader audience and apply them in a marketing/advertising setting. A video has to simultaneously catch a viewer’s attention while informing them. Karsu graduated with a degree in both film and communication studies in May of 2016.

Karsu has been with Sweeney since October of 2015. Continuing as a summer intern, she hopes to learn as much as she can, get an agency insight and learn new software such as Illustrator. When Karsu is producing videos for Sweeney, she likes to get a complete understanding of both the client and their needs before diving in. She uses different websites such as Vimeo and Instagram to research both trends and methods that best suit the needs of the client. After she researches, experimenting helps her determine the best solution. Karsu values the feedback of her coworkers and uses that to gauge how she can improve her work. Through out the process, she makes sure to keep the brand messaging in mind and double checks to ensure the message of the video corresponds correctly.

A major component of what Karsu does is conveying different ideas. A strong narrative is necessary in order to effectively convey an idea. The ending of a video is extremely important to Karsu. She compared it to the roof of a house. Without a roof, a home is not a home. It makes everything feel complete, the “final touch”, as she described it. Without good ending, a thought can fall apart, so, she likes to think about how a narrative is going to end before she thinks about the beginning.

Karsu hopes to eventually use what she has learned during her time in school and at Sweeney to make documentaries. Karsu was inspired to make documentaries after watching the movie, The Cove, a documentary about the strive to expose the senseless mass slaughterings of dolphins off the coast of Japan. This deeply impacted Karsu and was another key influencer in her decision to study film. She hopes to eventually make her own documentaries that bring key issues into the spotlight. She would like to focus on different social and environmental issues from around the world.

Aside from watching documentaries, she also enjoys scuba diving, photography, yoga, and listening to music. Music helps Karsu work more efficiently. Depending on her mood, her taste in music can vary from Chet Faker all the way over to Green day. Her versatility and creative sense of story telling make her a valuable asset to Sweeney.