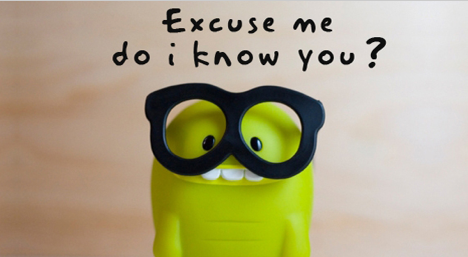 The Internet is a strange place indeed.  And the social aspect of it is the strangest part of all.  All day, everyday I get invitations to follow people and like people and endorse people… many of whom I don’t know.

Does anyone remember being a kid (or a parent) and being told, “don’t talk to strangers” or “if you see someone following you, run!”?  But not on the Internet.  Here, stalking is all the rage, common practice, encouraged behavior.

“Congratulations!  Someone you don’t know has endorsed you for skills they know nothing about,” says LinkedIn.

“The following people you don’t know want to be your friend,” says Facebook.

“The following 8 people and 12 others you have never heard of have tweets for you,” says Twitter.

What exactly is going on here?  I know the industry insiders want us to think of social media as a good ole jamboree where everyone’s intentions are genuine and innocent and pure.  But let’s be honest, the Internet ain’t exactly the Girl Scouts.  There are a lot of unscrupulous characters hiding behind a lot of dark and not so transparent corners… like the people who stole my debit card last week and sold it to someone else in Great Britain.

Don’t get me wrong, I enjoy being endorsed and liked and followed and even pinned and badged on occasion.  But this whole social media experiment feels a lot like the 1960s all over again, but with less music and fewer drugs… just sayin’.