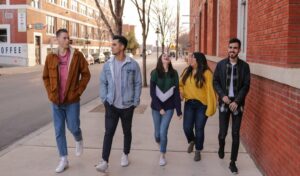 According to Pew Research, unlike the Boomers, there are no comparably definitive dates that later generational boundaries are defined. But for analytical purposes, Pew believes 1996 is a meaningful cutoff between Millennials and Generation Z for a number of reasons, including key political, economic and social factors that define the Millennial generation’s formative years.

Generation Z makes up 25 percent of the U.S. population, making them a larger influence than the Baby Boomers or Millennials.

By 2020, Gen-Z will account for 40 percent of all consumers and influence nearly $4 billion in discretionary spending, according to research from MNI Targeted Media.

According to Barkley’s Gen Z Insights Center, Gen Z already has up to $143 billion in direct buying power with the potential to impact more than $665 billion in family spending.

MNI Targeted Media research uncovered the following as it relates to how Gen Z interact with media:

“Gen Z is anything but monolithic or expected,” said David Sprinkle, research director for Packaged Facts. “A common thread between the diverse array of Gen Z kids seems to be their tendency to weave social media and digital experiences into their physical, everyday lives. For a brand to be big with Gen Z, having brick-and-mortar store locations and a strong online presence are both essential to generating business and buzz.”

“Gen Z has grown up with a fluency in technology well before any biology class. Consequently, they have very high expectations when it comes to digital experiences. This new digital standard can be summarized in three findings from our Gen Z study: (1) 67 percent of Gen Z believes in the next five years that websites will know what you’re looking for before you tell them. (2) 40 percent of Gen Z say they will stop visiting a site if it doesn’t anticipate what they need, liked or wanted. And lastly, (3) this generation, having been raised in a social media world, is almost twice as likely as a Boomer to provide data to receive a personalized experience. But, they’re going to hold all of us responsible for making sure it’s secure,” said Fabio Torlini, managing director for EMEA at WP Engine.

The Center for Generational Kinetics shares the following on Generation Z and it’s social habits.