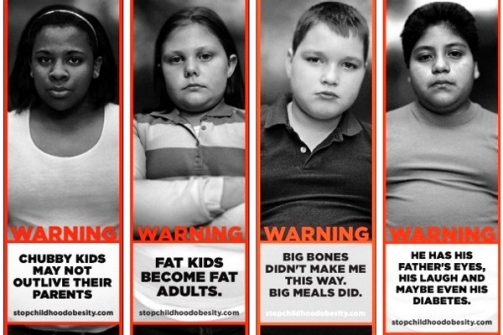 There’s a whole lot of talk these days about the child obesity ad campaign running in Georgia.  Some think it is a great idea to get attention for this incredibly important issue. Some think it is terribly inappropriate.

They are both right.

There are a lot of important physical and mental and emotional issues that need and deserve national attention.  And there are good ways and bad ways of going about it.  Machiavelli would suggest that the direct and provocative approach is not only acceptable, but good if in the end it gets people to pay attention.  More seasoned and learned experts would suggest that the damage caused by the approach actually exacerbates the problem.

As a human and a parent, here’s what I know:  It is never – never – a good idea to berate, belittle and shame your children.  And forget for just a moment that this type of personally insulting hyperbole is hurtful.  It is ineffective.

Yes, it may get national attention, which may also result in awards for the agency creating the ads (yippee), but it will not change anything.  It’s like using a hammer to loosen a screw from a piece of wood; you’ve got the wrong tool in your hand.  You may eventually beat the screw out of its place, but you will destroy the wood in the process.

Child obesity is a very serious issue.  As individuals and as a nation we need to start making a difference; first with ourselves – in our perceptions and our behavior – and second with those dealing with the issue.  Help, don’t hurt.

You know that old saying, “Every time you point your finger there are three more pointing back at you”?  Pointing your finger and telling a child he or she is stupid will not make them smarter.  And it won’t make a fat kid fit.

Be part of the solution, not the problem