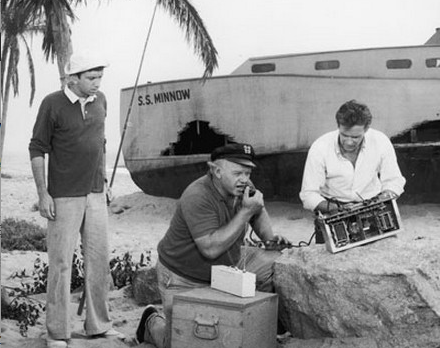 And by “lost” I mean Gilligan’s Island.

I mean seriously, what in the name of Neptune and Poseidon is going on at JC Penney?

First you fire the skipper (Myron Ullman) because the S.S. Minnow is lost at sea.  Sales are flat, the JCPenney image is out of touch and Ullman just isn’t getting the job done.

So you bring in the professor (Ron Johnson) and ask him to use his experience (as a research scientist and scoutmaster) to turn the ship around.  But only half-way through the second season you decide the professor isn’t making progress fast enough.

Then what do you do?  Why you jump into the way-back machine and set a course for backwards, and rehire the old skipper to save the sinking ship… even though he wasn’t getting the job done in the first place.  And, of course, the new old skipper can not act fast enough to undo everything the professor just did.

First order of business?  Fire the professor’s ad agency, hire a new ad agency and tell the world we made a mistake and we are sorry (we are not certain yet if the mistake was hiring the professor or bringing back the skipper, but that will become apparent in future episodes).

Anyway, here we are just two weeks into the new voyage (the second half of season 2), and the skipper is claiming to have escaped the island and reached dry land. “We’re happy to say you’ve come back to us,” declares the company’s new TV spot.  Apparently the castaways have returned home (which you will recall is the place they were originally at that resulted in the skipper’s first firing two years ago).

I am fairly certain at this stage of the game that  Mary Ann or Ginger or Gilligan or even Benjamin Linus could make better decisions for the USS Minnow. Or maybe not. In any event, I think the JC Penney show is almost as much fun, and definitely as campy as Gilligan’s Island.  So if nothing else, it will be fun to watch until they actually get rescued in season 4… assuming they continue to follow the script from Sherwood Schwartz.