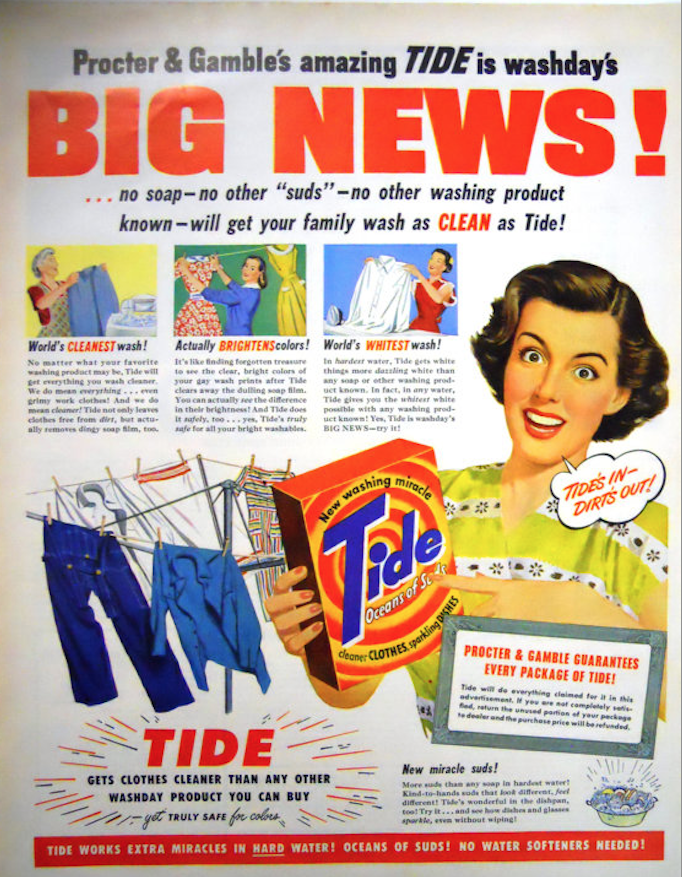 [Note to copywriters: Don’t hate me.]

As a young boy growing up n the 1960s, I was fully immersed in the world of Don Draper. TV commercials, radio commercials, newspaper ads, magazine ads, billboards… even product packaging. The first word I recall recognizing and reading at the tender age of 5 was “Tide”, as in the Procter & Gamble detergent. I can still see my mom unpacking the grocery bag on the kitchen table and that beautiful bright orange box with the brilliant target and the word T-i-d-e.

I have loved advertising my entire life. My older brother Denny and i once debated the superiority of J.C. Higgins versus Schwinn for over an hour… and he was only 8-years old.

As far back as I can remember, advertisers have been extolling the virtues of new products through a handful of key words: New & Improved! Faster! Smaller! Softer! 50% More! Free! Satisfaction Guaranteed!

And they worked. As points of differentiation, they grabbed the attention of consumers and influenced choices.

Thank God we are so much smarter today than we were back then, right? I mean no one is falling for those obvious and pedestrian tactics today, right? We’ve all seen enough investigative reporting to know that the vast majority of provocative claims communicated via a string of superlatives are usually purposeful distortions of the truth, right? And technology is so advanced that no one could possibly be influenced by such old school ploys, right?

But the thing is, we love new. During the second quarter of 2015, the most popular and effective TV ads were hawking new products and services. We also love newer… and improved… and faster… and cheaper…and more. Because although a lot has changed in the past 50 years, a lot has stayed the same.

We’re not gullible, we’re hopeful. We’re not stupid, we’re trusting. We’re not idiots, we’re optimistic. Just like we were in the 1960s. And that, in my opinion, is a good thing.