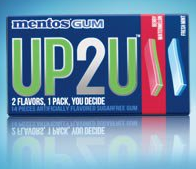 Perfetti Van Melle is gearing up to introduce Mentos UP2U, its first stick gum sold in this country. The initial advertising efforts will be focused in social media like Facebook.

To get its Facebook fan page started, PVM offered the first 1,000 visitors who clicked on the “like” button free gum in a promotion that began on June 13 and ended on Wednesday.  Nearly 100,000 signed up, and 99% of them did not get gum.

Phase two of the social media plans happen next month!  An invitation will be made on the fan page, asking those who “like” the new product to provide the name of friends they would want to receive samples.

Is it just me or does this sound like a cross between a classic pyramid scheme and the ever popular Ponzi scheme?  Mehmet Yuksek, executive vice president for North America at PVM says, “The strategy to introduce Mentos UP2U is very much 360-degree marketing, starting with very compelling and unique social media content.”

I don’t want to pass judgments or jump to hasty conclusions, but I think we’ve passed the point where “free gum” and “give me the name of your friends” are considered clever social media.  I’m just saying.