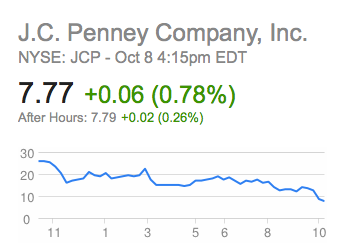 Seriously, this is the last time I plan to talk about JCPenney and its “leadership.”

“Over the last six months, we have made significant strides and are now seeing positive signs in many important areas of the business,” said Ullman.

“While pleased with the improving trends and more predictable performance, we are still in the early stages of the turnaround and will maintain a relentless focus on achieving our long-term goals,” he continued.

So, its not great yet, but it’s better than it was, I think.

According to a story in Homeworld Business, “The company reported that it saw improved sales trends in fiscal September, and expects this to continue throughout the remainder of the year. Sales for the fiscal month of September, ended October 5, were down 4% when compared to September 2012.”

So there you go. Wait. Sales are down? But you said there was a turnaround in progress.  You said you were pleased.  You said the trends were improving. Didn’t the Board of Directors fire your last CEO for the same type of performance? And wait a minute, isn’t this the same level of performance that got you fired in the first place?

“Although there remains significant work to be done, the experience, talent and drive of our team is allowing us to confront our challenges head on and take swift and effective actions to address them. We are all dedicated to continuing the momentum underway,” Ullman stated.

So you are okay with losing money, just so long as it is less of a loss than you have experienced in previous years? Who are you, the U.S. Postal Service? And Mike Ullman remains in charge? Meanwhile, after only six months, you have replaced your ad agency (Y&R) with three new agencies.

Just one more question, when did “JC” become synonymous with “Just Crazy”?