My updated theory on how island Sawyer dies…

In “The Substitute, the 4th episode of season 6, Sawyer puts fake Locke – and himself – to the test:

SAWYER: Do you read?
LOCKE: Excuse me?
SAWYER: Books. Do you read books?
LOCKE: Sure. Who doesn’t?
SAWYER: My favorite’s Steinbeck. Of Mice and Men. You know that one?
LOCKE: Nope. A little after my time…
SAWYER: It’s about these two guys, George and Lennie. Lennie’s kinda slow… causin’ George problems… so George walks him into the woods and tells him to look out yonder and picture the pretty little house they’re gonna live in some day. Then he shoots Lennie in the back of the head.
LOCKE: Well that doesn’t sound like a happy ending.
SAWYER: It ain’t.
[Sawyer points a gun at Locke]LOCKE: What’s on your mind, James?
SAWYER: I’m wonderin’ what would happen to you if I put a bullet in your head.
LOCKE: Why don’t we find out?

Fast forward now to the showdown at the OK Corral, where fake Locke and his group of gullibles have managed to capture the temple. Proud of his accomplishment, only Flocke knows that this is just the first battle of the war.

Flocke smiles at James and asks him to accompany him. “Where to almighty wizard?” Flock smiles: “I told you you were close. Now let me show you just how close we are.” Flocke leads Sawyer through and below the temple where they come upon a standing pool of water. Flocke tells James to look into the pool and picture his future. 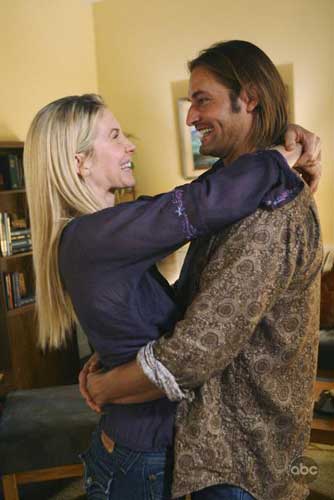 James looks more closely. “What the… Juliet?” A tear streams down his cheek as he sees himself with Juliet in a coffee shop.

Then Flocke shoots Sawyer in the back of the head.