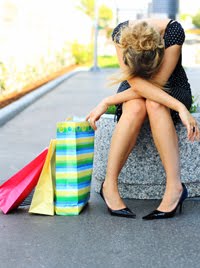 According to an article in Forbes this week, some pretty major marketers believe consumers need to turn the corner on the recession and start spending their money again.

“New ad campaigns suggest marketers are eager to shake off the gloom of tough economic times–and they hope consumers will do the same. While some economists aren’t sure the tough times are history, advertisers don’t seem to care. Companies are rolling out carefree ads that use humor, colorful images and upbeat language to get consumers to lighten up–and open up their wallets.” So says the article.

One commercial from BMW of North America tells anyone who will listen: “What you make people feel is as important as what you make.” Huh?

“There is a market turn toward the positive,” says Deutsch N.Y. Chief Creative Officer Greg DiNoto. “That’s a smart marketing strategy for any brand when you’re emerging from a recession. Brands need to be associated with winning.” Okay, that actually does make sense… if we have actually emerged from the recession, which most Americans have not.

On the flipside, Hamish McLennan, global chairman and CEO of Young & Rubicam, warns that many consumers and advertisers aren’t quite ready to spend money again. “Most people are cautiously optimistic that it’s going to get better, but we’re not seeing precrash levels–and we won’t for a long time,” he says.

So, what’s a marketer to do?

P.T. Barnum, the American showman and businessman, was credited (whether true or not) as saying that you will never go broke underestimating the stupidity of the American public. This camp believes there’s a sucker born every minute just waiting to doll out its hard-earned cash. Benjamin Franklin, on the other hand is credited for encouraging consumers to be frugal: “A penny saved is a penny earned.” Apparently not much has changed over the past few centuries.

One thing is clear: communicating with and/or marketing to consumers – whether the recession is over or not – is a good idea for any brand that wants to be or remain a leader in the marketplace. It’s just a question of “what” and “how” you communicate.