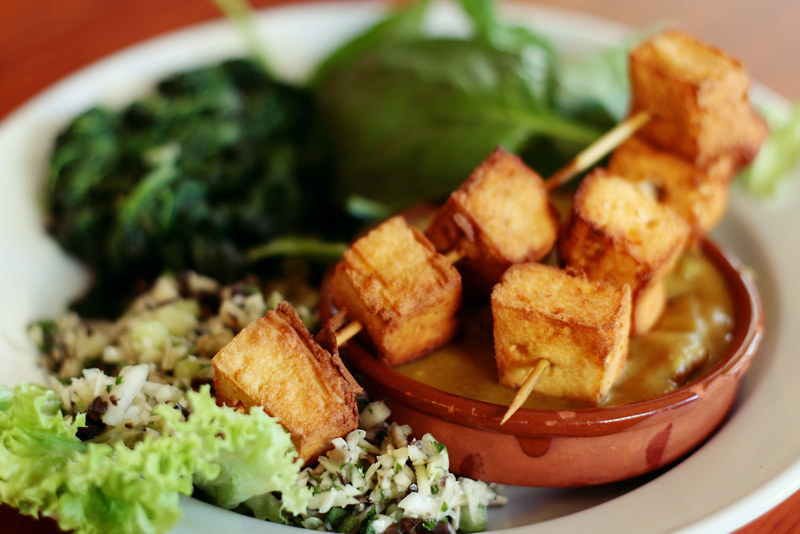 So, Christian, my son, serves up this little vegan/vegetarian gem via text:

Q. How can you tell if someone’s a vegetarian?

I must admit, after nearly 18 months on a plant-based (vegan) diet, which all began voluntarily after watching the Forks Over Knives documentary, I’ve witnessed firsthand the dark side of meat and plant eaters. And everybody just needs to chill out.

But be sensible and be healthy. Don’t eat vegetables treated with chemicals. Don’t eat animals infused with antibiotics. Don’t eat fish teaming with mercury. And don’t overeat, regardless of what you choose. As my dear, departed father always said, “All things in moderation.”

Also, be proud without being arrogant. I have no idea why plant-based food manufacturers insist on trotting out an endless line of vegan products that look, sound, smell and taste like the meat and fish they claim to hate. What is that all about? Have a little dignity.

Last week, while visiting a local eatery called Forage, I ordered the popular Impossible Burger, which was neither a burger nor was it all that impossible. I mean, it was a bunch of plants posing as beef, and it was really good. But why? Don’t we have the imagination to create something entirely new and interesting and enticing… that doesn’t look like a hamburger?

Or how about my favorite, Gardein vegan mandarin orange crispy Chick’n? Get it? Because it really isn’t chicken, it is just posing as chicken in the form of a breaded nugget. And they are delicious. But why? Or how about the Gardein golden fishless fillet? Also very good, but incomprehensible. I also really enjoy the Lightlife Smart Dogs, but I have no clue why they are shaped like hot dogs… why not squares or triangles that are sold with their own vegan buns? Or why do I even need a bun?

It’s like we are saying to the world, “Look at us, we are eating regular food just like you!” So silly. Stop being silly. Stop apologizing for your lifestyle or diet choice. Be Healthy. Be proud. But don’t brag.

I mean, really, we are all just eating. It’s not that big of a deal.