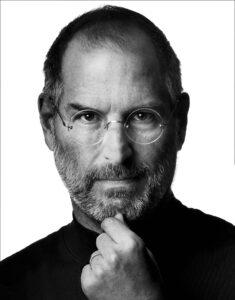 Steve Jobs celebrated his 60th birthday earlier this week; at least I assume he did. It’s hard to know for sure, since he’s been gone for three-and-a-half years now (10-5-11). But I hope he did.

I must say that for me, the world is a slightly sadder place without Steve in it. I mean, I didn’t know Steve personally. In fact, I never met him at all. But I loved the excitement and energy he brought to our universe and the mere possibility that on any given day he could show up and announce a new, amazing surprise that would change all of our lives.

And sure, there are still a lot of cool people out there doing cool things.  People like Tim Cook and Angela Ahrendts and Bill Gates and Steve Wozniak and Elon Musk and Martin Eberhard and Dean Kamen and Vint Cerf and Jeff Bezos.

But they are not Steve Jobs.

Steve Jobs not only sparked the imagination, he set it on fire, fanned the flames and poured gas over it. He was different. And he challenged anyone who would listen to do the same.

And I miss that.