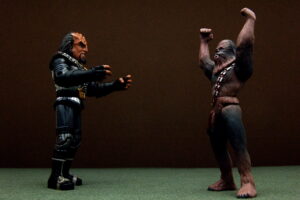 Ask me to be uber imaginative and picture Jean Luc Picard meeting Luke Skywalker. I would immediately engage with force. As a diehard fan of both Star Wars and Star Trek, I love the idea of pairing Mark Hamill with Patrick Stewart. The potential is endless.

But what a massive disappointment to see the end product created by Uber Eats. The premise, though curious, is mildly interesting, the writing is awful, the sets are questionable, and the performances are, well, less than inspiring.

Maybe it’s just me. Maybe I hate it and everyone else loves it; I suppose that is possible. I mean I know that I have very high expectations and even higher standards. And knowing these two actors and the main characters they have portrayed, simply served to heighten my hopes. But I hate it.

I have no idea who is at fault – the agency, the client or even the actors – but this is a sad failure. It is difficult enough to watch actors who are beyond their prime attempting to recapture their youth (think The Expendables or any recent Sylvester Stallone movie). But when the storyline is this weak, it just becomes unwatchable.

I actually cringed as these two stellar actors riffed on the pronunciation of “tomato” (yeah, that’s an original idea). It just makes no sense. Adweek calls them “charmingly confrontational ads”, but that is just pandering to the hoity toity, rather than thinking about the hoi polloi. Adweek also has the audacity to refer to these ads as “short films” for Uber Eats. Short on entertainment for sure, but not films by any stretch of the imagination (and trust me, no one stretched their imagination with these ads).

Let me be clear, I am insanely jealous of Georgie Jeffreys, head of marketing for the US and Canada at Uber Eats for getting to work with these celebs. But she should also be uber embarrassed to say “by forging this unexpected connection for the first time, we have been able to entertain viewers.”

First of all, it is not that unexpected. Second, it is not that entertaining. It could have been… the raw material was there. These are iconic actors who play iconic heroes. But why are they playing Connect Four and Air Hockey and eating fancy meals in a dark, dank and decidedly wet warehouse? And why do they despise each other and why are they so mean and petty?

Or maybe I am just being mean and petty. If I am, I apologize. I am just very disappointed at what could have been. Imagine these two actors in a classic study or library, debating which is faster, the speed of sound or the speed of light, when Uber Eats shows up and settles the argument “the speed of delivery”. Imagine them reminiscing their most exciting meals… Mark talking about the Cantina at Chalmun’s Spaceport and Sir Patrick pointing out that the Café des Artistes offered an amazing view of the 500 year old Eiffel Tower, when Uber Eats shows up with the “best meal ever.”

Unfortunately, these Uber Eats ads only caused me to lose my appetite.