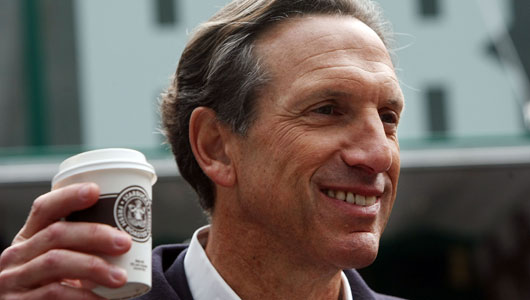 Not so long ago, much like Apple and Steve Jobs, Starbucks and Howard Schultz were being dismissed as down and out.

And therein lies the beauty of rear view mirrors.  Only now – looking back – can we see the true genius of both.

Some believe that Starbucks re-established itself by getting back to what it did best.  And sure enough, it cut back on selling books and movies and extraneous equipment, and refocused on selling really great coffee in really great environments.  But that is not the secret.  Much like Tony Hsieh realized that Zappos was not a great shoe retailer, but rather a great service company that happened to sell shoes, Howard Schultz realized (or perhaps always knew) that Starbucks is also a great service company that happens to sell coffee.

At some point – around 2006 or 2007 – success started to spoil Rock Hunter.  Fortunately, Howard Schultz realized that and quickly began making changes in order to return to the original culture he so successfully created.  So instead of focusing on growth and expansion, it refocused on loyalty and enhancement.  In other words, instead of worrying about getting more customers, it concentrated on understanding and servicing the ones it already had.

And the company returned to its roots and its core – innovating and investing in new ideas… like exceptionally high quality instant coffee and light roast coffee.  And it got back to community initiatives, like “Jobs for the USA” wristbands that raise money to fund local start-up businesses.  And it is looking forward with new retail services and new retail store ideas.

Last week my son (the scientist) schooled me on the subject of inertia.  He reminded me of Newton’s Law that objects in motion tend to stay in motion.  One need look no further than Howard Schultz or Steve Jobs to see that even the most successful business leaders never cease innovating.  As my old boss Ellen McConneell often told me, “there is always one more thing to be done.”