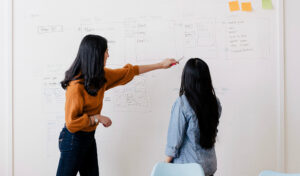 A logo walks into a bar. The bartender says to the bar-back, “what do you think?” The bar-back looks the logo up and down and says, “It’s nice, I like it.” The logo drops dead.

If the word “like” was poison, I’d have passed away a thousand times over. But instead, it’s the success of a project that is the true casualty of such a lazy opinion.

Whether it’s flying solo or preceded by its favorite friend “don’t,” the word “like” is one of the worst things you can say when giving design feedback. Potentially the most impactful thing I learned when I started in this industry is that design is not about the designer. You’re not designing to appeal to your boss, nor should it cater to the client’s aesthetic preferences, if they know what’s good for them. The best design work is made for the audience, and the only time someone should think about whether it appeals to them personally is if they’re a part of that demographic.

When we, the makers, the managers and anyone involved in the process direct our work based on what we like, we’re setting the design up for failure. Simply put: subjective discussions are where design projects go to die.

If you’re often a participant in these sort of discussions, it’s time to start thinking critically and strategically about design. My rule of thumb when critiquing is to remain as objective as possible, whenever possible. And when I catch myself thinking something subjective, I ask myself why it matters. Every opinion should be backed up by the reason it affects the way the message is or isn’t absorbed by the audience.

When you have a reaction to something, good or bad, first assess whether your opinion is personal or professional, whether it’s relevant to the objective. If you love it, has it become too precious to you to remain unbiased? If you’re on the fence, is there something wrong with the way it’s communicating, or does it just transcend your comfort zone? Does the white space really need to be filled? Does asymmetrical really mean ineffective?

Instead of “I dislike the red color in this design,” here are some alternative ways to discuss your feedback:

“The red color relates too much to our competitor and might interfere with brand recognition.”

“The red color impedes legibility because it doesn’t provide enough contrast against the pink background.”

“The red color doesn’t work because it doesn’t support the calm tone we’re trying to achieve.”

See the difference? When we critique constructively, it affects the design productively. Instead of chasing our tails with likes and dislikes, trying to hit a target in the dark, we can push the communication initiative forward.

Now, this is not to say that aesthetic appeal doesn’t matter. It does.
But only to the degree that it matters to the audience. Sometimes it only matters to them on a subconscious level, so you need to do your research to establish a strategy. Other times, focus groups will help guide your knowledge of what appeals to users. Once in a while, you are a part of the audience demographic, in which case your inner voice saying “this is cool!” or “this is ugly!” has a valid seat at the table. Even just being on the outskirts of a target market is enough to at least gauge whether something is on-trend or outdated.

So if you, reader, are involved in the development of design work, or really anything that’s being made for an audience other than yourself, I challenge you to toss your likes to the birds and come up with a strategic reason for everything you think should stay or go. Put away the lens of what appeals to you personally. Instead, why is it working? Why isn’t it? What’s veering off course from reaching the end communication goal? What is this design saying, versus what you want it to say?

Breathe new life into your work with an open mind and a strategic feedback filter, instead of letting your biased baggage send your projects 6-feet-under.

And to all the designs I “loved” before, rest in peace — you could have been so much more.

Olivia brings expertise in visual communication to the Sweeney team, informed by her education at University of Cincinnati’s DAAP, and six years of experience in design agencies. Olivia applies a strong standard of quality to her work, in both visual craft as well as creative concept. She specializes in identity and brand communications, having contributed to work for Verizon Wireless, Whole Foods, the Ohio Department of Commerce, P&G, and more. Olivia prides herself in her ability to empower teammates to do their best work, and her determination to push creative work to its ultimate potential.