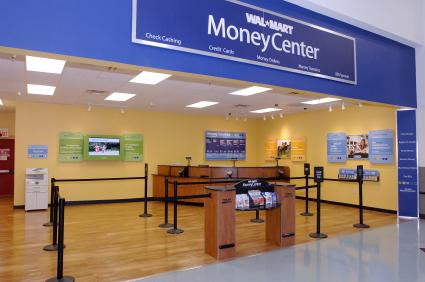 Walmart will soon have about 1,500 in-store MoneyCenters – that’s roughly one in every other store – where you can cash your check or pay your bills. Apparently company associates just aren’t busy enough selling clothes and groceries and electronics and fast food and automotive supplies and home furnishings and sporting goods and computers.

According to recent news reports, Ira Rheingold, executive director of the National Association of Consumer Advocates, said the MoneyCenters could be a good thing for consumers, by bringing more competition to the industry and focusing on an underserved segment of the population.

And when you really think about it, how much worse could Walmart do than the traditional banking industry that drove us into our current recession? At the very least we know they will greet us upon arrival.

Still, local watchdog groups are keeping a close eye on Walmart as it expands its financial services. After all, Walmart is becoming more bank-like without any of the regulation. And the company does have a reputation of destroying anything and everything that gets in its path.

Quite frankly I have no idea if the MoneyCenter concept will work; clearly Walmart thinks it will. And I guess it really doesn’t matter one way or the other. For as Sam Walton once said, “There is only one boss. The customer. And he can fire everybody in the company from the chairman on down, simply by spending his money somewhere else.”

And that’s the bottomline.